Mies van der Rohe's Farnsworth House (1945-1951) is widely regarded as one of the most influential designs in 20th century architecture. The house itself is not only an icon of the International Style, but it also has inspired many equally iconic houses throughout the world: Philip Johnson's Glass House (1949), Steve Hermann's Glass Pavilion, the Division Knoll Residence, the Lumenhaus, and many others. (It would be an interesting project for someone to compile a site chronicling these many houses.) 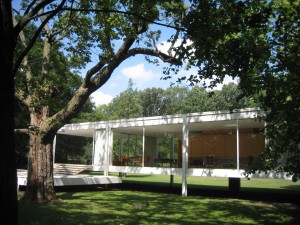 I had the opportunity of visiting the house with a Canadian couple and one of the Trust tour guides towards the end of this past summer, and seeing the house was a genuinely moving experience. The house was far better designed than even I had imagined. I always recognized the importance of the large-scale design, but being able to walk through the rooms of the house made me aware that this high level of design is also reflected in smaller-scale aspects of the house. The depth of this design contributed to the fact that very little in the house seem out-dated, despite the fact that it is almost 70 years old.

The beauty of the design made me reflect on what is now being called the "design innovation" approach in business and elsewhere. It occurs to me that anyone who wants to adopt this approach, would do well to learn from the creations of brilliant designers, whether they be architects, product designers, or artists. Designers of all stripes can learn a lot from the Farnsworth House. What follows is a catalog of a few of the things I learned about innovation from visiting the house last September.

1. Innovations involve keeping an audience in mind. It may seem peculiar to pick a house that had such a tumultuous design and construction history as an example of keeping the audience in mind. Edith Farnsworth famously criticized Mies' design and added screened porches and various other "improvements." Yet, it seems clear that Mies did have an audience in mind. Instead of being designed for Ms. Farnsworth, the house was designed for a particular model of how a modern life should be lived. The fact that so many houses have been based on Mies' design is a testimony to the fact that his intended audience does exist. Further, Mies apparently articulated this to Ms. Farnsworth: when she complained that there was not enough closet space for her clothing, Mies countered that she didn't need to bring so much clothing to a weekend retreat. Everything coheres around an idea of a weekend retreat open to nature. For instance, because one might want to entertain guests on the weekends, there is a large patio that allows traffic to flow in and out, there are windows situated to allow cross-ventilation in the summertime, and there are even two bathrooms so that Ms. Farnsworth could keep her personal items separate when entertaining. Clearly, there were disconnects between the vision of these two people, but Mies did have an audience in mind. It just didn't end up being necessarily Ms. Farnsworth.

2. Innovations arise through constraints. Mies van der Rohe wanted to create a house that expressed his particular design aesthetic. One could imagine Mies drawing a sketch of the house in a few seconds. Perhaps a few minutes more would be all that was required to figure out the basic structural features that needed to be in place to create such a house. But, to this extent it is merely an idea, not an innovation. Innovation comes from working through the many challenges that need to be overcome to bring the final object into reality. The challenges he faced placed constraints on Mies' project that inevitably pushed him even further. For instance, Mies' desire to minimize the vertical structures of the building by using floor to ceiling glass and minimal steel supports resulted in no wall surfaces for electrical outlets. Hence, Mies had to put the electrical sockets in the floor, and he installed rather elegant openings for this purpose. It is the process of working out these details that differentiates a mere idea from an actual object in the real world. 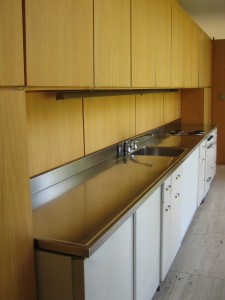 3. Artistic innovations endure. Not all the design elements were the natural consequence of physical constraints. At times, Mies' artistic ambitions clearly pushed him further. For instance, the kitchen counter is made of a single piece of stainless steel that at one point becomes the top surface of the range. Mies could have easily made this counter out of multiple components. It would have been far simpler to construct, especially considering no one had attempted a single kitchen counter of this length in stainless steel before. However, the resulting continuous structure has a simplicity and beauty about it that no other kitchens of the time could match. It also presumably inspired a whole tradition of restaurant work surfaces. When one considers this innovation one is reminded of other product innovations like Apple's single stainless steel body in the MacBook and iPad lines of computing products. In fact, I would argue that one of the reasons for Apple's recent success is that its designers approached the task of creating products from a largely artistic perspective. This is apparent in the fact that Apple continues to produce videos highlighting the beauty of their single-piece construction.

4. Innovations involve trade-offs. Although this post is mostly about Mies' design, visiting the house also made me aware of innovations that have happened since the house was built. When Mies designed the Farnsworth house he took extra care with materials, and had the large sheets of glass custom made for the residence. Since then, the standards of glass have changed, and when one of the large windows shattered in the 1996 flood, it had to be replaced with tempered glass to remain up to building code. Although the owner did a great job replacing the glass, and it is difficult to see any difference between the new and the old glass when viewed head-on, things change when you view the glass at an extreme angle. From an angle the new glass does not have the clarity or beauty of the old glass, as the tempering process changes the transparency of the glass ever so slightly. However, when compared with the alternative of a very dangerous glass surface, it is simply a trade-off that needs to be made. Trade-offs are not always apparent when one initially brainstorms ideas, but they become important when one moves to implementation.

5. Innovations can be serendipitous. Glass can get dirty. A house made of glass, situated in a tree-lined grove would seem to require significant care and maintenance. For instance, my apartment building has to clean windows on nearly a monthly basis.  However, I have been assured by a woman at the Farnsworth House office that the windows rarely need to be washed. The fact is that the water running down the flat surfaces during rain storms is sufficient to keep them clean throughout the year, except for a few occasional washings. Mies was a master architect, so this feature may have been designed in from the beginning, but the effectiveness is even more surprising when one sees the remarkable transparency of the glass: it would seem to be very difficult to maintain such remarkable transparency. This illustrates one principle of innovation: you may not be able to guess all the strengths and weaknesses of your creation ahead of time, or even how your product will ultimately be used. Coat hangers are excellent for fishing items out of drains. Standard cell-phones in India take on some of the qualities of smart phones thanks through the ingenuity of vendors in a train station. (As Genevieve Bell explained at SXSW 2010.) Science is full of examples of mistakes that end up being more profitable than the original experiments could ever have been. One cannot always predict how one's products will be used, and a truly innovative designer should always be open to these new possibilities. 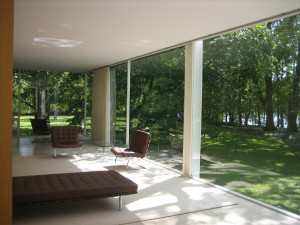 6. Innovations involve leaving things out. Mies famously said, "Less is more," and it became one of the mantras of the International School. Even if you are striving for another aesthetic, there are important lesson that you can learn from this approach that many people, organizations, and corporations miss. It is true that the Farnsworth house pushes simplicity to the limit. The house seems to demand a particular style of living that even Mies does not seem to have embraced in his own life (see the 7 part video by the BBC). However, this is also what makes the house beautiful and interesting. In a similar fashion the Apple iPhone has only one button on its surface, Twitter's usefulness stems from the brevity of its postings, and even "knock-offs" products can be seen as remarkable innovations in simplicity: they omit features that some purchasers would find superfluous. (See this ?What If! video for more.) Less often can be more.

As with all great designs the beauty is not only in the initial idea, but it is also apparent in how that idea is developed and implemented. As a society we seem drawn to the idea of instantaneous ideas, and so we like the idea that Newton found the idea for gravity from being hit on the head, or credit people with objective intelligence regardless of what is done with that intelligence. But reality is a challenging and exciting place, and we should reserve our highest honor for the people who manage to bring their realities into being. There is a lot that one can learn from Mies van der Rohe's Farnsworth House.

Republished from jfhannon.com. Photos by John Hannon published with the permission of the National Trust. All rights reserved. Do not publish without written permission. If you would like to visit the Farnsworth House yourself, visit the Trust website at http://www.farnsworthhouse.org/.